It’s International Women’s Day – a perfect time to reflect on the progress women have made politically, socially, economically and culturally – around the world!

Today, this article goes out in We Are The City where I reflect on the gender bias in the corporate world and what we can do to fix it. I was asked to include some interesting initiatives that are being put in place to help educate and change the mindset. And I reflect on initiatives in both the third sector in India and in the private sector in London. Lots we can learn from both sectors and parts of the world. Enjoy the read!
___________

Including men in the gender equality challenge is the key to changing bias, breaking silos and broadening perspectives…

Did you know that to tackle the gender equality challenge in countries around the world, boys and men are a vital part of the equation?

Of course they are. It’s impossible for women to tackle this alone. Boys and men must be a part of the solution.

And, to achieve such equality, we must disrupt the comfort zone that society has created around men and age-old styles of alpha leadership. Both because men have dominated most corporate hierarchies for too long and because the qualities and values associated with successful leadership are often revered in male leaders and criticised when exhibited by female leaders.

The status quo and erroneous belief about the superiority of males over females needs to be shattered from early on. And a new “diversity comfort” level needs to be created.

For years TIE has been disrupting the comfort zones of global seasoned professionals and igniting their humanity and ingenuity by connecting them with global challenges around the world.

We work with organisations in 25 countries, but when considering the gender issue and the solutions, one of the NGOs that comes to mind is a children’s rights organisation in India called Shaishav Child Rights. 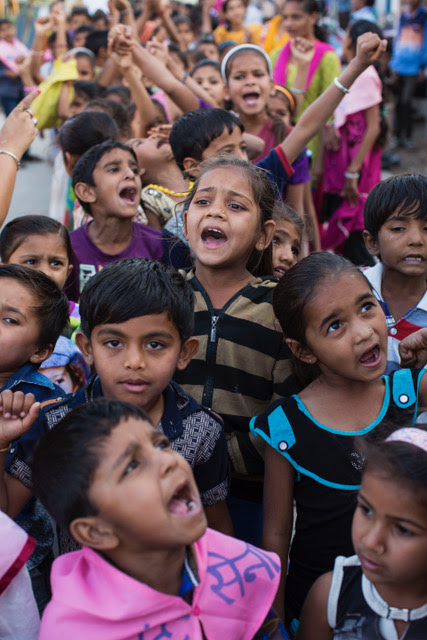 Shaishav is a grassroots NGO working out of Bhavnagar, Gujarat, India. They work with and for marginalized children, as a completely participatory, child-rights NGO. They believe that all children should enjoy basic rights and experience the joys of childhood equally; that all children should become productive, socially sensitive, and democratically skilled citizens.

A crucial, often-overlooked element to empowering girls is the sensitization of boys.

And when it comes to Shaishav’s gender work, they work closely with adolescent boys and instill in them empathy for girls, which in turn instills respect, and makes them view girls as equals.

We can learn a lot from these organisations.  This image above from our work with Shaishav stands out – of boys and girls marching in the streets, united, using their voices to show the world they are in this fight together.

Men aren’t the problem. And it’s not just about Girl Power being the solution….. keep reading…