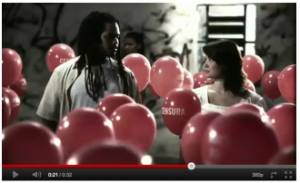 We have just received an update from our partners in Brazil following the placement with Mark Dewings in 2009. Mark was on TIE working on a human rights project with the National Movement of Human Rights, a national human rights network in Brazil, as well as with the local agency MakPlan. The objective of the campaign was to improve the reputation of human rights defenders, and the campaign idea was to create a way of symbolizing ‘the violence’ that can bring together the issues and organisations, extend across media channels and be flexible and enduring. They created the Red Balloon campaign.

Since 2009 the campaign has been on a national Brazilian TV station (RedeTV). There have been a total of 1,391 insertions to date, in 7 cities, and this media coverage, should they have paid, would have come to over R$6,000,000. Just think of the number of people who have seen this ad.

This could not have happened without the support of WPP and Ogilvy New York, and of course MakPlan and Atelier. The power of collaboration.

If you would like to know more about the communications campaign that Mark and the team created, you can see his case study here.