The Golden Baobab Prize (GBP) is a literary award that addresses the issue of insufficient quality children’s books in Africa by discovering, nurturing and celebrating promising writers of African children’s literature. 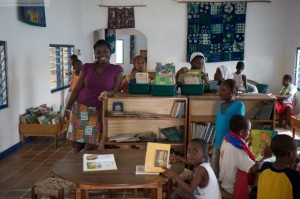 It connects these writers with leading publishers and partners to ensure that winning African children’s and young adult books enter the marketplace. The GBP was established in July 2008 by Deborah Ahenkorah and Rama Shagaya with a mission to encourage the writing of African literature for children and young adults. It is administered through an annual competition that invites entries of unpublished short stories written by African citizens irrespective of age, race or geographical location. The vision of the Prize is to identify African literary giants of the next generation and to connect them with leading publishers to produce classic African stories for the market place, stories that will be appreciated for years to come.

So far the GBP has inspired the creation of close to 400 children’s and young adult stories from 17 African countries. 3 outstanding stories have been published in 15 countries. They have the potential to seriously effect transformational literary change across Africa, and their goal in ten years time is to see bookstores all over the world overflowing with stellar works of African literature for young readers.

They are driven to their work by various factors. One of these is the grim statistics about children’s literature in Africa. UNESCO’s basic principle, “full and equal opportunities in education for all,” remains unattained in Africa. According to Scholar Edgar Arthur, “at a time that Britain was producing 2000 children’s titles a year, Nigeria barely produced 60.”

Deborah Ahenkorah of the GBP speaks of her personal experience with this issue. She says, “I grew up in Ghana reading tons of American and British books. I rarely read any Ghanaian literature. I got a scholarship to attend university in the United States and there I realized how ignorant I was about Africa. Class after class would expect me to contribute an African perspective and I couldn’t. I didn’t know as much about Africa as I knew about the Western world. The injustice of this situation is that children in one part of the world have access to beautiful books that they can relate to. And children in another part of the world have to be content with reading about other people.”

The GBP’s work inspires the creation of African children’s books that will be in school curricula and on library and bookstore shelves all over Africa and across the world. As well, they make the dreams of budding writers who are seeking to be recognized, celebrated and published come true. In the early stages of the growth of the prize they need to invest time publicizing their work so they can attract the best African writers (citizens), potential funders and literary communities in Africa and elsewhere. A solid communications strategy will help them better achieve all of the above goals.