Ryan is now home in London and we’re pleased to say his placement in Brazil was an absolute success. 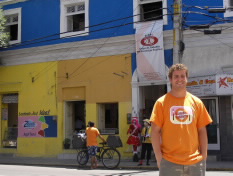 Ryan came to Recife to work with GTP+ to help to decrease discrimination amongst the population as a whole about products and food stuffs prepared by workers who are living with HIV and AIDS. The primary objective of Ryan’s placement was to create a campaign to promote the Solidarity Kitchen with a view to strengthen the activities and sustainability of GTP+.

The communications that Ryan, GTP+ and INATA developed were actually quite simple– but absolutely crucial. Before the TIE project started the Kitchen didn’t even have a sign or a menu, so they decided they had to simply raise its profile. 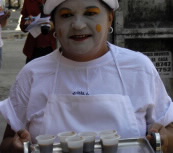 The first job was to make a sign and some menus; then they organised a launch event where flyers and free caldinho (a traditional Brazilian soup dish) were handed out by clowns and drag queens.

The great news was that the launch event (and the kick-start to the campaign) was hugely successful. Two television crews turned up to film the event for the local news. A government representative came along to show his support and the HIV and AIDS health minister for the state of Pernambuco also popped by.

They also utilised a very interesting but rather annoying media in Brazil – a man on a bike with a speaker that’s basically one long radio ad. They had them for three hours a day in the run-up to the event.

On a normal Friday in the Solidarity Kitchen, 11- 15 people would come and pay for lunch. On the launch day more than 60 paying customers came and ate. 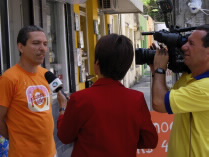 Since the launch event the kitchen has been receiving a substantial number of new customers, and all of them have been returning on a regular basis. What is also interesting is that some customers who had stopped using the service (which GTP+ think was partly down to discriminatory gossiping) have been returning on a regular basis. Perhaps signifying that the support, media and public representation of the campaign has gone on to significantly decrease HIV and AIDS ignorance in the area. 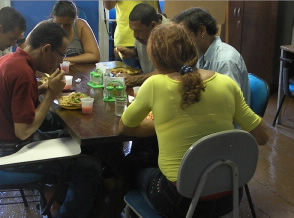 On the whole everyone has been hugely impressed with the campaign and the support and interest Ryan and TIE have given the Solidarity Kitchen, and in turn GTP+.