Raise awareness of Integrate’s work and show society that people with intelligence deficit disorders are citizens with capabilities and limitations just like everyone else. 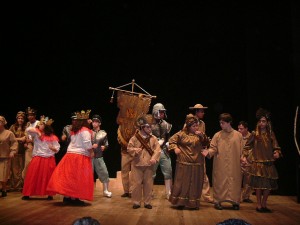 Intergrarte – Centro Pró-Integração, Cidadania e Arte (Pro Integration, Citizenship and Art Center) is an NGO that has been working with people with intelligence deficit disorder and other specific difficulties, particularly Down syndrome, for more than 10 years. The idea of the institution came from two mothers of children with Down Syndrome that were initially inspired by the fact their children had a real interest in art, but were also regularly facing prejudice from society. They founded an organization in 2001 to help their children get involved with art but also try to change the reality of discrimination.

Integrarte’s methodology is Constructivist: teachers and students build the work together, using group dynamics, dialogue, discussions, workshops and playful activities that stimulate the integration of the participants. The workshops stimulate thinking and action involving themes such as: participation in politics, citizenship, interpersonal relations, respect to differences, rights of access to the goods produced by the society, peace, etc.

As a result of Integrarte’s projects involving human rights, art and socialization; the institution is now being recognized by segments of the society. This recognition can be seen through some of the support they have been receiving to continue developing their projects. A great example was when CHESF (a local corporation) gave them a space to present the artistic works that their students produced.

However, in the past 10 years, Integrarte has been struggling to find means to spread information about who they are and their work in the society. The ways they currently exhibit their work is not ideal because they lack the communication knowledge required. Yet another barrier they face is the high cost of producing such a communication campaign.

The plan is to create a campaign to raise awareness of the work they do. With the goal to change people’s behaviour towards those who have an intelligence deficit disorder and also to attract more volunteers, which will provide them with the necessary support they need to continue growing.