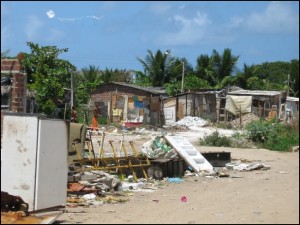 A Biblioteca Multicultural Nascedouro – BMN – (The Multicultural Library birthplace) – is a permanent part of Boca do Lixo, a cultural movement that promotes culture and education as a critical part in building a more just, pluralistic and egalitarian world. Specifically, BMN’s strategy is to promote reading incentive through artistic and cultural work for human and social development, implementing educational activities that promote information and knowledge building with the community and schools of Peixinhos. The types of activities include poetry recitals, storytelling, film events, a traveling library that goes to other locations, research assistance, initiatives within schools, and many more.

Peixinhos is a very poor district situated between the cities of Olinda and Recife, and is known as one of the most violent communities in the metropolitan area of Recife. The community has a population of approximately 40,000 inhabitants, and of these, more than half of the population is made up of children and adolescents. The vast majority of these students study in public schools and there are a total of 7 in the neighbourhood.

Public schools in Brazil are attended by the poorest fifth of the population, and they receive very poor quality education. This directly affects the intellectual development of students, hindering the power to form opinions and to defend them, and even the ability to learn to think for themselves. All this can be mitigated and even reversed, with habits that teach them to build their own ideas, through reading, for example. Many of the students that are involved with BMN suffer from learning disabilities due to what is called functional illiteracy (a great difficulty in understanding what is read), and this in turn is directly related, among other things, by not developing the habit of reading.

BMN was launched to the population of Peixinhos in October 2000, and although the number of visitors to the library has increased recently, they need to increase the number of children and adolescents, mainly students from public schools in the district, to get involved with the library. BMN are looking to develop a more effective communications strategy that will publicize the services of BMN to the 7 public schools in the district, aiming to reach the young people and children, so that they learn about BMN and want to get involved. Raising awareness of the library will enable hundreds more children and adolescents to start to read, and therefore improve their capacity to understand, digest and criticize information through improved reading habits. This will enable the construction of knowledge and the emergence of critical citizens that then reflect on their reality in order to overcome the barriers that stand before them, and hinder the realization of the basic rights of citizens.