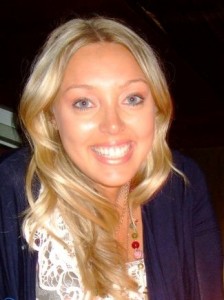 Rachael started at glue Isobar in June 2009 as Traffic Manager with a focus of improving efficiencies and streamlining processes within the studio. Less than a year later Rachael has stepped up to the position of Creative Services Director concentrating on developing and managing an expanding traffic team to coincide with the growth of the company. Key to her role, Rachael works closely with the Heads of departments to create the right team structures and to ensure all projects are delivered against targets and objectives.

In 2008 Rachael relocated to London where she joined Blue Barracuda, a boutique digital marketing agency, as Traffic Manager. In the year that Rachael was at Blue Barracuda she spent her time between the London and also Tallinn (Estonia) office, where she assisted in building the Development team and managing the communication structures between the two locations. As a result, she gained a wealth of digital knowledge and discovered a passion for agency life.

Before embarking upon the advertising world in London Rachael initially carved out a career at home on the Gold Coast, Australia as Sales and Marketing Manager for The Villa, a private and exclusive event venue. During her time at The Villa she focused on organizing corporate and golf events including high profile launches of both the F430 Ferrari launch and BMW 7 series, providing her with an eclectic mix of experience and knowledge.

In addition to her professional background Rachael has dedicated her spare time to charity work. Over the past five years Rachael has become a committee member of charities such as Red Cross and the Bravehearts Charity Organization, whose mission is to stop child sexual assault within Australia. As part of her contribution with Bravehearts, Rachael was appointed Events Manager and organized their annual fundraising gala in 2005 and 2006. In addition to this she has also organized luncheons and events for Breast Cancer awareness.

Rachael claims her love of traveling stems from her childhood by the sea “growing up as a water baby definitely gave me an appetite for adventure. I love visiting new places and experiencing different cultures, normally following the direction of the sun”. Whilst working in the UK she has spent several holidays away exploring Europe and her immediate surroundings. In 2007 Rachael traveled continuously for 6 months visiting 16 countries within the United Arab Emirates, Asia and Europe. During her time in Asia she volunteered in several orphanages and was especially touched by the Orphans of Cambodia.

Clearly a ‘people person’ Rachael loves to entertain and as a result is quite good in the kitchen, picking up recipes from all over the world, her favorite those with a bit of spice and testing them out at home. During her time in London Rachael has also been absorbed by the arts visiting several festivals, galleries and exhibitions. Consequently, she has developed an interest in photography and is looking forward to capturing some great footage while in Brazil.

Rachael will be working with the NGO Habitat for Humanity while in Brazil. Click here