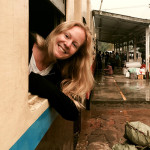 Summary of the project: I have spent an amazing month in Recife helping an NGO develop and launch a new initiative that will focus on raising the profile of healthy food and nutrition in schools.

Milla Chaplin has been based at Mindshare Worldwide working across both the BP and Nestle accounts in a hybrid account handling and strategy role for a little under 2 years. She entered into the communications industry by way of the WPP Fellowship, completing three fantastic years in London, New York and Beijing and has now settled back in the UK to further her career in Media.

During her time on the Fellowship, Milla had the opportunity to spend a year with Added Value in London working on cultural insights and brand consultancy across a number of clients. She then moved to New York to take up a Client Manager role in branding and design at Landor, working on the Diageo business, and finally spent a year at JWT in Beijing, where her principal responsibilities were on the Shell account.

A linguist at heart, Milla has a degree in Mandarin Chinese and German from the University of Leeds, and has spent several years in Asia; studying in Taipei, working in Shanghai and Beijing, and travelling extensively in South East Asia. All of which are a long way from her family home in Jersey (original Jersey, not New Jersey).

Now back in London, Milla spends a lot of her time (and money) going to the theatre. She also loves to get involved in sports, particularly hockey, tennis and running, but leaves plenty of time to dive into London’s eclectic and ever-changing restaurant scene.

That said, if there’s a travel adventure to be had, Milla will still probably be the first in line to sign up.

Milla will be going to Recife to work with Comunidade dos Pequenos Profetas. You can read more about the project HERE.