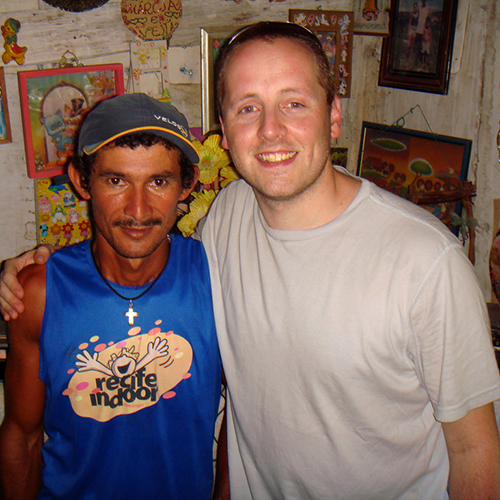 Summary of the project: I developed a campaign to improve the lives of street garbage pickers in Recife by getting people to recycle.

Ed spent a month in Recife, a city in the North East of Brazil, working to develop a communications campaign for the NGO Edificio Ecologico (EE), with their host agency INATA. EE is a pioneer venture that gets middle-class families in high-rise buildings to recycle the materials that they would otherwise throw away with the conventional rubbish. The primary objectives of EE are to improve the city’s environment and the lives of the hundreds of street garbage pickers who rummage through the garbage throughout the city of Recife. The major hurdle until now has been that very few people know about the initiative. This is where Ed came in. Ed’s objective was to increase the number of apartment buildings partnering with EE - specifically 100 buildings within a year - by prompting people to sign up to the scheme via an effective communications campaign. Ed did a tremendous amount of research before hand, raised a staggering £4500 for his marketing budget, and when he arrived, hit the ground running. What he accomplished at the end of the month was quite remarkable – a top notch communications plan that will make a world of difference to EE, the environment in Recife and the lives of thousands of catadores. But it doesn’t stop there. On top of making a huge difference to the organisation, Ed also gained a tremendous amount. He now knows he’s able to work on his own without the fall-back of team members or superiors (and thrive) and he developed his strategic abilities (ran a research programme, developed communications strategies, and wrote creative briefs – things he wouldn’t have had the opportunity to do back home). However, the most important thing that Ed took away from his month in Brazil was his boost in confidence & self-belief. Absolutley invaluable. If you’re interested in knowing more about his experience, the work he did, and the wonderful work of EE, click on the case studies link.