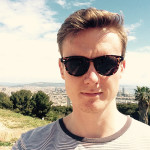 Summary of the project: I spent a month in Uganda creating a brand for a charity’s guesthouse to support their activities for the future.

Andy went to Uganda to create a brand for Kasiisi's Guesthouse project. This will help increase Kasiisi's sustainability and ensure they continue their education and conservation efforts in the Kibale National Park. Read his case study here.

Andy is from Manchester and the only thing he loves more than Man Utd is a good Ad. As a child he loved to draw, read, paint and write, which made him think that advertising wouldn’t be a bad way for him to earn a living.

He decided to put London off for a few years after graduating with a degree in English Literature from Cambridge. He went to work for a fifty year-old agency in Leicester instead. Three years later he decided it was time to make the jump to London. He’s been an Account Director at BBH on the Virgin Media business for the past year.

Outside of work, you can find him spending his wages in one of Soho’s many record stores, attending the odd Life Drawing class, or cheering on Man Utd.

Andy went to Uganda to work with The Kasiisi Project in January 2016. You may read more about his project here.