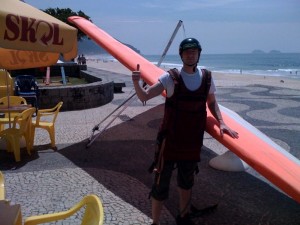 TIE is thrilled to announce that Matt Oxley from DDB Tribal will be going out to the Sertão in the Northeast of Brazil to develop a video documentary to help tell the story of the Quilombos and their partnership with IS Brasil. He’s heading out in February and will be there for a month – so not long now!

Matt graduated from Plymouth University (MediaLab Arts) in 2000 and returned to, what was then, BMPDDB. This was following a 14-month work placement at DDB during 98/99. Digital has always been his thing, some call him a geek and as Technical Director of Tribal DDB, they are probably not far off the mark. He strives to get technology into anything he does, even if it doesn’t need it!

He has had the joy of working on some great accounts, VW, Philips, Guardian, Hasbro… the list goes on. He has worked with some great people over the years, a particular highlight was working with John Webster on one of his pet projects, though at the time he’d admit that he perhaps didn’t fully appreciate that opportunity.

Whilst he does live, breath and love work, there are other things in his life and some of them don’t involve technology. He’s a huge fan of lots of music but soul & funk get him every time. Good listening whilst chilling out doing carpentry, yes carpentry, and none of that machined nonsense, hand tools or nothing like that. He also spends a lot of time cooking and exercising, and finds they work well together – the more extreme and interesting the better!