Increase and expand HIV testing options amongst the vulnerable population, therefore providing HIV+ people with an improved quality of life, and those who are HIV-, with the necessary prevention information to decrease their vulnerability. 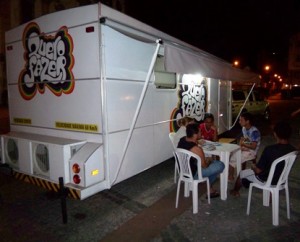 Since 1997, Pact, an NGO that has activities in over fifty countries, has been active in Brazil, and has contributed to social development and to the reduction of the vulnerability of the Brazilian population, by networking and partnering with local organizations and governments. Pact established its Brazilian office in 2003 and its main goal is to provide technical assistance and to build the capacity of local NGOs and their networks by working toward HIV prevention in Brazil and Peru. Since 2003, Pact has implemented a number of different programs and projects that were made possible by working in collaboration with, or being sponsored by, a number of different global organisations that range from the Ministry of Health’s National Program of DST and AIDS, USAID (Brazil and Peru), Elton John AIDS Foundation, GESC, amfAR, and UNODC.

Brazil has a concentrated epidemic: HIV prevalence in the male population with homosexual practice is 10.5%, while for the heterosexual male population, the number of HIV+ people is 0.8%. In terms of incidence, MSM (men who have sex with men) are 13 times more likely to become infected than the general population. And Brazil currently has approximately 255,000 people who are HIV positive, but do not know their HIV status. To know serology status is the best way to expand health care, increase the quality of life and contribute to infection reduction.

“Men who have sex with men” (MSM) is a terminology referred to men who dedicate a sexual activity with other men (homoerotic practices), independently of the way they identify themselves; many of them choose not to see them selves as being homosexual or bisexual.

It was this that prompted Pact Brazil to create their “I Want to Do” project. The objective of the project was to target this vulnerable population (gays, transvestites and MSM) and provide them with the opportunity to get quicker HIV testing (in about 5 to 10 minutes), along with psychological assistance and monitoring, without being exposed to health centres. As well, to increase the number of people within the vulnerable populations to get tested, and to increase the number of people within this population to get tested using the rapid test. Finally, the objective is to strengthen links amongst this population and the local public health care systems (this target population normally feels stigmatized when dealing within the health care system and as a result, are reluctant to be a part of it).

Through the TIE project Pact hopes to develop and implement a campaign that helps the target population to feel comfortable to do the rapid test, work towards combating stigma and discrimination (S&D), and encourage the target population to seek early HIV diagnosis which then allows them to improve their quality of life. These campaigns should be associated with the mobile unit VCT service (trailer) and the VCT service at the NGO.