Improve the lives of children living on the streets of Zambia, by empowering and inspiring them through the transformational power of creativity and arts

Improve the lives of children living on the streets of Zambia, by empowering and inspiring them through the transformational power of creativity and arts

Barefeet Theatre is an NGO built by a team of artists to share their creative disciplines with young people, with the sole purpose of bringing about change and human development. They are an outward looking cultural movement founded in Zambia in 2006 by a group of Zambian and Irish artists who met by chance (some would say fate), and began to collaborate creatively together, delivering theatre workshops with children living on the streets. The workshops were a great success, and many children came off the streets and into the Children’s Centres as a direct result of engaging in the workshops. 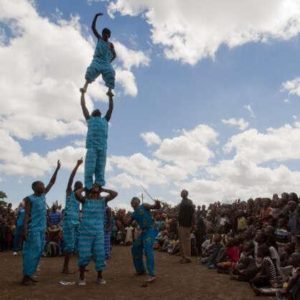 Barefeet Theatre is committed to contributing to the development of the children living on the streets, previously on the streets or at risk of going to the streets of Zambia, into physical, healthy, cognitively and socially competent young people. Through the theatre for development methods of play, creatively and self-expression, Barefeet offers these children opportunities for divergent thinking and encourages them to believe in their own capacity to be creative and make positive life choices. Many of the Barefeet members have themselves lived on the streets and grown up in the very Children Centres that they now deliver workshops in, acting as fantastic inspirational role models for the children and youth they work with.

Over the past years Barefeet has grown organically into an organisation working with multiple partners in Lusaka. One of the areas which has grown extensively is the Barefeet Performance Company. The performance company is the income generating wing of Barefeet and is responsible for almost half of the total revenue, which is used to pay their core costs. Apart from the core costs, this money goes towards Barefeet Programs. Most of their core programs are not externally funded and are financed solely by the income generated by the performances.

With this TIE placement, Barefeet hopes to create a strategy to scale their income-based revenue model, based on their performances and workshops. This will include co-creating a solid business plan for the performance company, thinking of the long term sustainability and network they can build to really make an even bigger impact in Zambia.

Cheryl Binnis from LV= is going to spend a month in Zambia working with Barefeet Theatre. Stay tuned for updates!