Improve the education of young boys from vulnerable communities through art education, humanities and culture by getting them to participate with Em Cena 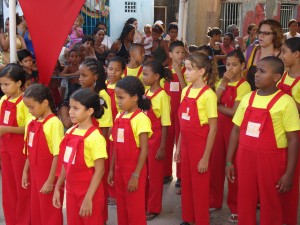 Em Cena Arte e Cidadania (On Stage: Art and Citizenship) is a Brazilian NGO based in Recife and was founded in 1998 by a group of friends who strongly believed they could make a difference in the world through the arts.

The struggle for human rights is rewarded only at the most basic levels, with the majority of the population guaranteed only minimal survival conditions. Meanwhile, formal education and art education are pushed into the background and the real tools one needs to fight for her or his rights (such as the ability to read and write, find strength to face challenges, and so forth) are set aside.

This is how Em Cena began. The people who started Em Cena wanted to provide those families and kids who were so used to receiving money from the government, or attending bad schools, with an opportunity to improve their lives through the magic of the arts.

This magic is made up of essential ingredients: form, sound, colour, word, movement. The artist’s work enables her or him to dominate, control, and transform experiences into memories, memories into expression, material into form, and elements into works of art.

Em Cena Arte e Cidadania is based in the Coelhos, an underprivileged area in Recife, Brazil. Historically, Coelhos is a community divided in rival areas, dominated by groups of drug dealers for cheap drugs (such as crack, marijuana or amphetamine). The area is made up of people with very low-level education and there is a high level of male unemployment.

In order to make a difference in the community Em Cena Arte e Cidadania has decided to act in four different areas, which is reflects their objectives: artistic; educational and humanistic; community development; and idealistic. They try to use the arts as a way of enchanting and strengthening individuals so they can face their condition of life with dignity, when previously their basic rights have been regularly broken.

Within the community Em Cena is known as a classic ballet school, but it is in fact a performing art school where children and teens can go to learn dance (contemporary, ballet and folk dance), music (choir and piano) and also take part in the Humanities class. Historically, the number of girls involved with the organisation have been much higher than that of boys. Nowadays, 90% of the children and teens enrolled are girls.

Over the years the Idea that Em Cena Arte e Cidadania is a classic ballet school has become stronger in the community regardless of all the work done to change this concept. Because classic ballet is still perceived as something that only girls get involved with, the boys who want to take part in the activities offered by Em Cena have faced all kinds of prejudice. The few boys who have been brave to join Em Cena Arte e Cidadania are usually victims of bullying from their friends and, sometimes, even their own family. And many other boys who tried to join the institution were not allowed to do so because their parents believed ballet is for girls and football is for boys. Therefore, because of the prejudiced thinking within the community about the roles of boys vs girls, children have been denied the chance to enjoy the best of Em Cena Arte e Cidadania.

Em Cena believes that they can change this scenario by doing some communication work in the community to help people become sympathetic to their cause and also stimulate the debate about art, genre and prejudice. Therefore, they feel as though it’s important to focus on raising awareness to families about the importance of the work that Em Cena Arte e Cidadania does, and how what they do can change young boys lives as well.