Giraffe are in trouble. And not many people are paying attention. Limited conservation research has been undertaken on giraffe throughout Africa and their numbers have plummeted by almost 40% over the past three decades.

Founded in 2009 by a group of enthusiastic volunteers and based in Namibia, the Giraffe Conservation Foundation is the only NGO in the world that concentrates solely on the conservation and management of giraffe in the wild throughout Africa. Dedicated to a sustainable future for this endangered species, GCF’s objective is to raise awareness, provide support and secure a future for giraffe, 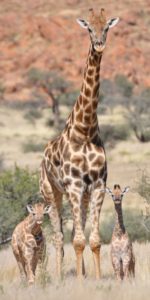 Despite being a young organisation, GCF’s work has already shown promising results. Largely based on their work, giraffe were finally listed as ‘Vulnerable’ on the IUCN Red List of Threatened Species in 2016, firmly placing them on the global conservation agenda.

World Giraffe Day is another exciting GCF initiative that celebrates the tallest animal on the longest day of the year (or night – depending on which hemisphere you live in), on June 21st. Since its launch in 2014, they received an overwhelming response. In the first year alone, over 50 zoos and other organisations from around the world joined in the celebrations. This great success is due to the engagement of a special group of giraffe enthusiasts: zoo keepers from across the globe. Their passion for giraffe helps raise awareness to this endangered species with millions of zoo visitors every year.

To keep momentum and leverage the current attention to giraffe preservation, this placement will help GCF develop an overachieving communications plan, focusing on a campaign for World Giraffe Day. It will help them identify and develop ways of sharing success stories with their community and broaden their supporters base, guaranteeing a future for giraffe across Africa.

Chris Kelsch from Wieden+Kennedy New York is going to Namibia to work with the Giraffe Conservation Foundation. Stay tuned for updates!