Help the Clarisse Machanguana Foundation create opportunities for Mozambican youth, empowering them and strengthening their self-esteem through sports, education and health programs

Help the Clarisse Machanguana Foundation create opportunities for Mozambican youth, empowering them and strengthening their self-esteem through sports, education and health programs

Mozambique has a population of about 28 million people, of whom 46% are under the age of 15 and facing increasing social, health and education challenges.

The school dropout rate in Mozambique is very high, particularly for girls. Literacy rates are 56% for Mozambican girls, 15-24 years old, according to UN figures. 3 in every 5 Mozambicans have HIV but do not know of their positive status. And 60% of people on treatment stop taking their ARVs within 18 months. Studies show that a major barrier to keeping people on treatment is stigma, the fear and shame they experience related to their HIV positive status.

Founded by a retired WNBA basketball player and UNICEF Goodwill Ambassador, the Clarisse Machanguana Foundation (CMF) aims to challenge the status quo in Mozambique and create opportunities for youth across the country through sport, education and health. 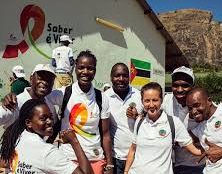 Working with schools and communities, CMF builds mentors, activists and future leaders of Mozambique, acknowledging that without a healthy body, a sound mind and good education all other efforts to support youth development are incomplete. Clarisse Machanguana lends her voice and experience to inspire youth, building their self-esteem and creating opportunities for them to thrive. Using her exceptional ability as a role model, Clarisse engages and motivates young people to listen and learn. She leverages her position to bring other socially influential personalities on board, creating impactful messaging and images.

They realized that the work has to be deepened: they need to eliminate the stigma around HIV and AIDS in order for people to attend testing and treatment centers without fear of discrimination. For this reason CMF wants to organize another national campaign that will take place in 2018/2019, called ‘Anda Comigo’ (‘Walk with Me’ in English). For this campaign, the foundation’s president has vowed to walk the entire length of the country (2.600 km!), mobilizing artists, social influencers as well as government officials so that the entire nation understands that this is a cause that affects them all.

This TIE placement will support CMF finalize the concept of the ‘Anda Comigo’ campaign, helping them design a solid communication strategy that will leverage local and national media, as well as drafting an international media strategy to support their fundraising efforts. Tom Fraser from Saatchi & Saatchi is going to work with CMF in 2018. Stay tuned for updates!