The Marine Megafauna Foundation (MMF) is an organization based in Mozambique, whose objective is to save ocean giants from extinction. They focus on the research and conservation of key threatened marine species. Their main focus is the ‘Marine Megafauna’, which are large marine species such as sharks, rays, marine mammals and turtles. These animals are key components of marine ecosystems but, as they are long-lived and have low reproductive rates, their populations are usually the first to be reduced by human pressures.

MMF develops pioneering research to develop and implement long lasting conservation solutions that allow these species to rebuild their populations. MMF was developed to research, protect and conserve populations of threatened marine species along the eastern coast of Africa. They have since expanded globally and now in 2018, conduct research in six continents and now have a permanent presence in Indonesia. 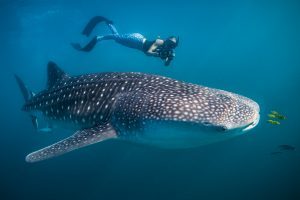 In 2018 MMF launched MEGA expeditions, an opportunity for dive tourists to go on expeditions with MMF in Mozambique. This was deemed the most effective way for MMF to generate organic revenue to cover overhead costs and ensure its sustainability, from research done by a Stanford researcher.

This TIE placement will help them tell the story of these new expeditions, helping raise awareness for their conservation efforts and bring more financial resources that will guarantee the long-term impact of their work.

Mika Singh from WPP is going to spend a month working with MMF, helping them develop a communications strategy to raise awareness of MEGA Expeditions in order to raise much needed revenue to keep the organisation sustainable. Stay tuned for updates!