Help MNDH fight for, and raise awareness of, human rights 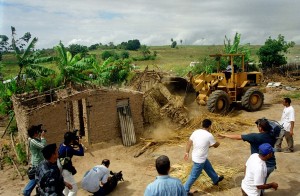 Movimento Nacional de Direitos Humanos (National Human Rights Movement) was founded in 1982, and is today the main organisation promoting human rights in Brazil. Human rights should be universal, interdependent and indivisible, and should guarantee the likes of health, culture and education.

In Pernambuco, as it is in Brazil, MNDH works to promote human rights and to denounce its violations within state territories. It is in permanent contact with government officials and councils, as well as with local media.

Like many civil society movements, MNDH started out during a dictatorship period in Brazil in the 60’s that lasted until the mid-80’s. Back then, all media was subjected to fierce censorship and human rights workers who opposed the regime were often sent to jail where most suffered torture. These episodes could not be published as they were and these activists were portrayed as ‘subversives’ and ‘enemies of the country’.

Despite regular accomplishments over the years, human rights are still violated in Brazil and governments are its most common violators. HR are violated either by actions of state officials (e.g. policemen), or by omission of elected managers who fail to provide basic rights such as education, health, food, jobs and communication.

One result of systematic violations is the increase of violence. In Pernambuco alone, about 4 thousand people are killed every year: mostly young male African descendents ranging from 15-25 years old. As a rule, those are the people whose rights are more frequently violated: African-descendents, women, homosexuals, indigenous peoples and the poorer population both in urban and rural areas.

As well, even though most Brazilian children are at school, the quality of education is rather questionable and several kids graduate elementary school with poor reading and writing skills. The population also suffers with a public health system where there are not enough professionals and resources.

The aim of the placement is to increase awareness in Recife and Brazil about the need to fight for human rights. Specifically, we want people in Brazil to understand that human rights work is not limited to guaranteeing the rights of the incarcerated population, but also to effectively provide basic rights such as education, health and communications to the whole population.