Help boost financial and logistical support to Boca do Lixo’s Library and therefore improve the future of hundreds of young people from poor areas of Recife by improving how they read. 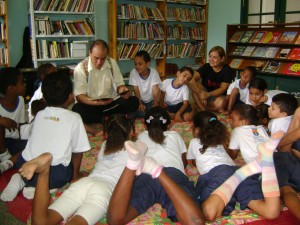 Peixinhos is situated in the limits between the cities of Recife and Olinda and it was once known as one of the most violent communities in the metropolitan area of Recife. The old industrial slaughterhouse was one of the main engines that moved the neighbourhood economically in the 1970s, until it closed and the space became a centre of drug use, violence and all sorts of negative behaviours.

The Movimento Cultural Boca do Lixo (MCBL) – Cultural Movement “Trash Mouth” – was created in the 1990s with the objective to change the neighbourhood’s violent situation. The way they did this was through promoting the development of artistic activities such as music, theatre, dance and literature, with periodic activities such as festivals, and cultural weeks – an event with various artistic expressions such as short courses, recreation, gigs, theatre, etc. Another very important place for children and adolescents that live in Peixinho, is the library founded in the year 2000, which is called Biblioteca Multicultural Nascedouro (BMN) – Birthplace Multicultural Library.

MCBL believes that most of the public school students that search for BMN’s services are doing badly at school because of a very common problem in Brazil – functional illiteracy. This means they can read, but don’t fully understand how to interpret the message or think critically about it. This problem is directly related with the lack of developing reading habits, and if not resolved will cause great limitation throughout the lives of these young people.

This is why BMN feels that developing strategies to motivate reading is very important. Since TIE’s last campaign with BMN, the number of young people from public schools attending the Library has increased. Therefore, proving that BMN’s work with motivational activities is helping the community to increase their interest in literature and reading, helping the children in their school development and with the cultural growth of the local community.

With this new campaign BMN wants to show the importance of the work they do to the community, with the purpose of getting logistical and financial support from local business to help guarantee the future of BMN and their work. Through financial donations from the government and local commerce, BMN hopes to be able to invest more resources into their motivational programmes and maintain the Library.