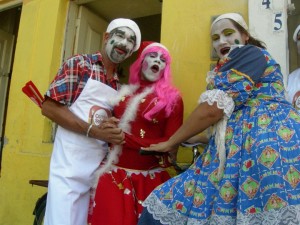 Now hosting a TIE placement for the second time, GTP+ intends to fight discrimination and prejudice against people with HIV/AIDS.

There are many ways that people with HIV and AIDS face discrimination throughout their day-to-day lives.

Regarding the family, there are many examples where families reject their HIV+ family members, not only because they are living with HIV, but also because of the connotations that the virus carries; homosexuality, drug use and prostitution, for example. GTP+ often see HIV-positive people who are virtually disowned by their family and essentially end up dying alone.

Then there is the media. Now and again, people’s serology (when positive) is headlined when the media relates to sexual crimes committed by people living with HIV/AIDS. The media ends up criminalizing the person for living with HIV, not for the crime that they committed. Headlines such as “HIV-positive man rapes boy” are commonplace, but they increase stigma against this population, leading society to assume that people living with the virus are particularly ‘dangerous’. HIV is not the crime. Raping someone is. The person who committed the violence should be judged for the act of violence itself, regardless of his HIV status. And it is these sorts of headlines that are creating more stigma and discrimination for this population.

There are also many cases of people with HIV/AIDS who suffer discrimination in the workplace, which can take many forms, including: the obligation to make HIV testing in recruitment and the consequent refusal of employment, dismissal on the grounds of HIV status, actual or supposedly, the exclusion of training and promotion opportunities, prejudice on the part of co-workers, and the exclusion of the benefits of health insurance, among others.

The new campaign intends to contradict these biased assumptions, fighting discrimination and the stigma of delinquency of people living with HIV/AIDS.