Help educate young people from Lilongwe’s biggest shanty town of the problems related to drugs and alcohol, and inspire them to be positive contributors to their community 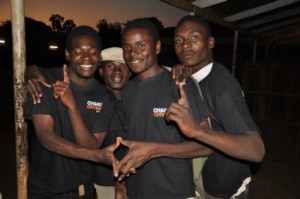 Chance for Change was established in 2011 by leading professionals in the field of youth development with considerable experience in other organisations including Venture Trust and Save the Children. As well as supporting young people in the UK, the institution has established separate development programmes that support marginalised young people in Nepal and Malawi. Since their establishment, they have secured over £500k for their work in the UK and abroad, developing strong partnerships with funders including the Souter Trust and the Rank foundation.

The key objective of their program in Malawi is an advocacy-based programme focused in Area 23, a densely populated shantytown of Lilongwe. Their work will focus on four key areas: Personal effectiveness, Drugs and Alcohol, HIV/AIDS and Entrepreneurial thinking.

Area 23 is the most densely populated area in Lilongwe with an estimated 100,000 plus population. It is an area with very poor housing, very poor facilities, and very high unemployment rates, particularly amongst young people. It is perceived locally as quite an unsafe place and also as an area of high crime. In populated urban townships such as Area 23, which have extremely high levels of unemployment, drug and alcohol related crime is a rapidly growing issue. Addiction and alcoholism is not necessarily a problem, but anti-social and criminal behaviours exhibited by young people using alcohol and drugs are. Both alcohol and drugs are relatively expensive and often crime is the only way of financing their use.

The institution wants to educate these young people, raise awareness of the problems related to drugs and alcohol and give people choices, engage them in thinking about how they can change their behaviours and transforming them into positive contributors to their community. It’s about opportunity, and the young people realizing they have options. Also, it would be great if they could get to the point where these behaviours are not considered to be cool or acceptable any longer.

Therefore, the objective of the proposal is to help Chance for Change create a campaign that will not only give them a platform for their work specifically in relation to drugs and alcohol, but raise public awareness that local agencies are taking this problem seriously and taking positive action to reduce this growing problem.