The Associação Somos Professores is a small non-profit organization based in Recife (State of Pernambuco, Brazil) founded by teachers with the mission of ensuring high-quality public education in Brazil.

Since 2015, they promote innovative teaching practices in the local public school system by encouraging society to engage more actively with the work of dedicated teachers and help them develop their full potential with the support of their community, which they achieve through their own crowdfunding platform for public school teachers: www.somosprofessores.org.

A new direction for SomosProfessores

Cameron Milne, from the WPP network, went to Recife in 2018 to work with SomosProfessores and to help them determine which future activities would have the greatest impact in bringing more innovative and collaborative lessons to poorly funded public school classrooms a local communities in poor areas of the city. As a result of Cameron’s project, SomosProfessores changed their focus from being exclusively a crowdfunding platform for public school teachers and began supporting teachers’ initiatives directly, through pedagogical and financial support. You can more about his experience on his case study here.

Following up on Cameron’s project, Susan Min, an Account Director from VMLY&R New York went to Recife to help SomosProfessores launch their new initiative: the Alavanca Project. Together with the local agency Melhor Comunicação, Susan designed a communications campaign to spread the word about the SomosProfessores’ new project, Alavanca.

The Alavanca Project seeks to support public school teachers in the city of Jaboatão dos Guararapes who wish to carry out extra-curricular projects with their students, but lacked funding and support to do so. Moreover, the organisation knew that many teachers in this neglected school system were short of self-confidence to be able to pursue these extra-curricular projects. So SomosProfessores designed the Alavanca Project as a means to support both financially and pedagogically innovative projects within the public school system of Jaboatão, therefore increasing student engagement with the school inside and outside the classroom.

The idea was great; however, the organisation struggled to get the word out among Jaboatão teachers about Alavanca Project inscriptions and getting them to sign up, a situation that threatened the success of the project. As such, they weren’t expecting more than 80 candidates for Alavanca.

However, after the TIE communication campaign was launched, the organisation got nearly 200 candidates pitching projects for their students.

This allowed SomosProfessores to handpick 15 different projects from 15 different teachers based on the impact that these would have on the students’ learning. Today, they are supporting and overseeing the successful implementation of these 15 extra-curricular projects, in fields as diverse as robotics, cultural rights and waste management, all with a view to improving the students’ education, and reaching hundreds of students in Jaboatão dos Guararapes. You can know more about Susan’s experience here. 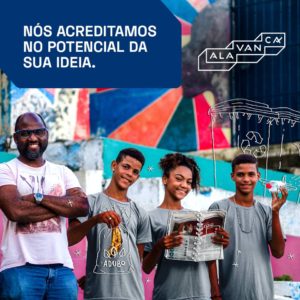