Habitat for Humanity Brazil is a non-governmental, non-profit organization, which seeks the promotion of housing as a fundamental human right and the elimination of all forms of inadequate housing. They do this through dignified and accessible housing solutions for families of very little income and education, effectively below the poverty line. HFH Brazil is part of the international Habitat for Humanity (HFH) network, present in over 90 countries.

Rachael Stephens from Glue Isobar developed TIE’s project with Habitat for Humanity in January 2011. Rachael had to create a communications campaign to involve more Brazilian private schools and students in helping the organization to build more houses to more people through volunteering and fundraising activities whilst promoting decent housing as a fundamental right.

The “Hands of Hope” campaign was born and left Habitat with a valuable kit of materials to present themselves to schools and get them on board. Before Rachael’s campaign, Habitat didn’t have any material that could help them implement their campaigns or clubs in schools. For this reason, it was much harder to arouse the interest of students and school leaders. Now, every time Habitat goes to a school to present their projects and introduce the organization, they distribute brochures and provide material for students to use in their campaigns. From the words of Volunteer Coordinator/Public Awareness Officer Joanna Sultanum “Having a kit like this at our disposal allows us to approach the schools with more concrete material”.

With the Hands of Hope campaign, Habitat established a goal of getting 3 schools on board with their voluntary program for the Fiscal Year of 2012 (July 2011 – July 2012). To achieve this goal they presented lectures in 4 schools in Recife, 1 in São Paulo and 1 in Salvador. Two schools from Recife engaged in constructive activities with Habitat in their housing project in Feira Nova, but haven’t fully got on board with the voluntary program (although one is keen). The school in São Paulo (The Christian American School of São Paulo) implemented a Habitat club and the school in Salvador will implement one soon. 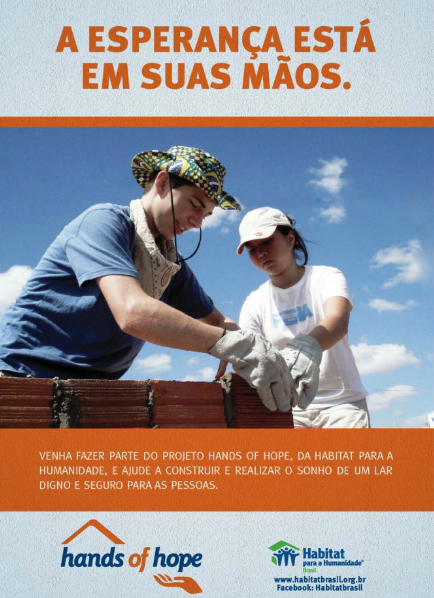