Chance 4 Change believe that all young people have the right to be active citizens and equal members of society. The organizations was established in 2011 by leading professionals in the field of youth development with considerable experience in other organisations including Venture Trust and Save the Children. As well as supporting young people in the UK, the institution has established separate development programmes that support marginalised young people in Nepal and Malawi. Since their establishment, they have secured over £500k for their work in the UK and abroad, developing strong partnerships with funders including the Souter Trust and the Rank Foundation. Their main objective is to educate and empower the youth, giving them the tools to build a better life and community.

Campaign to help rehabilitate young offenders back into their communities

When it comes to young offenders, judges in Malawi currently only have two options: innocence or jail. It’s not uncommon for people to go to jail for 3-5 years for stealing a mobile phone. You have young guys who are under age and put into horrible conditions in jail. And coming out HIV+, malnourished, and oftentimes, some aren’t getting out. They have regularly found people who are being left in jail long after they should have been released.

Chance 4 Change wanted to change that. So they have developed a Custody Centre for young offenders. The idea was that the young offenders would go to the centre to be educated and trained. This is an exciting project where they are introducing new ideas that are different from the current status quo. Their goal is to stop looking at these young people as criminals. And instead, send them out with tools to set up businesses and be entrepreneurs. Malawi is such a poor country, and there are not enough jobs for well qualified people. Never mind people who have spent their teenage years behind bars. The idea is to create skills for self employment.

In order for all of this to come to fruition, Chance 4 Change needed help spreading the word about the centre and why it was so important for Malawi. They needed to get the police, the government, the social welfare ministries, as well as community leaders in Malawi knowing about the Centre and help them understand how and why it’s a viable option to prison and that it was there for the judiciary to use.

So we had Kate Nicoli going to Malawi to work with them. She spent a month promoting a culture of greater forgiveness and raising awareness of the work developed at the Centre.

The work developed by Kate had a huge impact on the communities and on C4C’s work. Community leaders, family members, human rights organizations – everybody has been asking to use the print materials and they are carefully looked-after possessions in the villages. The level of take-up of the campaign by Chiefs and community leaders has been astonishing and there is a real commitment to the forgiveness message.

Part of Kate’s campaign was the Global Forgiveness Day, that was celebrated after the placement. It was a huge success and C4C was able to engage hundreds of people in the event. Read more here. 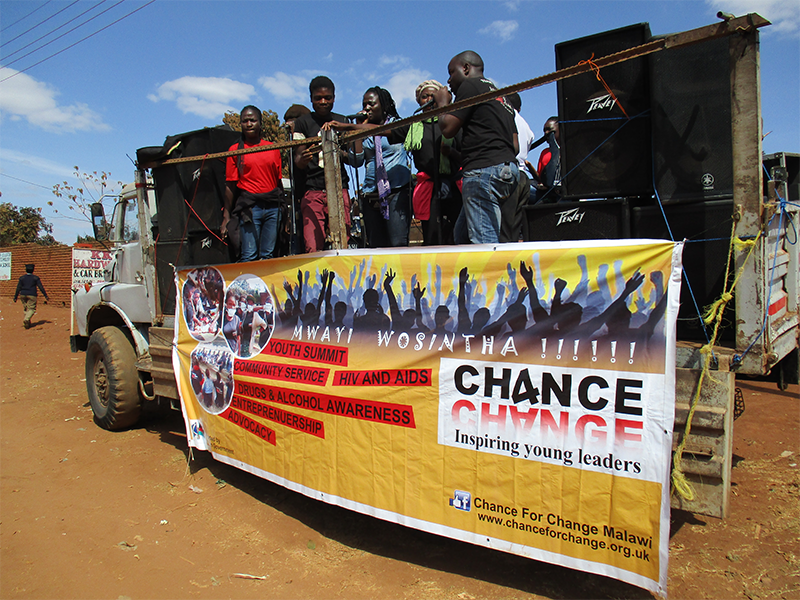 Malawi is one of the poorest countries in the world. It has high rates of HIV/AIDS, and therefore, many orphaned children. As a result, young people, to make money, get involved with petty crime. The legal system is unforgiving, and if caught, the young people find themselves in overcrowded prisons. Many don’t know how old they are, their names, many catch horrible diseases, are abused, and due to the overcrowding, have to take it in turns to sleep or lie down. There isn’t enough space. Chance for Change works to rehabilitate these young offenders.

Chance for Change has an Entrepreneurs Programme to give youth who have been discharged from prison an opportunity to change, to go on to run their own businesses and earn their own money. In April 2018, Octopus Investments sent Chloe Allan on TIE to help improve the programme. She helped them research what was and wasn’t working, provided recommendations and helped implement solutions to some of their more pressing challenges.

One major challenge was that the young people didn’t receive any money to make their business ideas come to fruition. Chloe decided that needed to change, and created a Loan Facility.

Since Chloe’s placement, Chance for Change has lent 500,000kwacha split equally across 5 groups, which amounts to £100 per group, and providing until now a total of 17 people with loans to start businesses.

Despite the occasional and expected lack of payment from a group, the interest the others have been paying back means that they are breaking even at the moment, which was their goal.

You can read her case study here.

Helping at-risk girls and women create financial independence, and a better future for themselves and their young children, through a honed entrepreneurship programme strategy

It is common knowledge that in Malawi the gap between the rich and the poor is big. An example of this inequality is through access to education. Education favours the rich and leaves out the poor. This results in increased vulnerability, which then leads to girls being trafficked, sexually abused and exploited, with many ending up as teen mothers.

Chance for Change successfully piloted the ‘Pioneers Of Change’ for trafficked girls in 2017. Through this project, the organization worked with girls trafficked into child prostitution, or those who have been victims of sexual abuse, violence, exploitation, and child marriage.

Recent figures have shown that the number of defilement cases, sexual abuses and exploitations have gone up. To make things worse, it is claimed that 95 percent of the abuses occur in homes or communities, and by people the girls know or are related.

While Chance for Change has helped to transform these girls through their personal development programme and counselling sessions that they offer, they still believed there was a gap that needed to be filled. Most of the girls are trapped in these situations of abuse or exploitation due to poverty, and lack of financial independence.

In 2021 Chance for Change asked TIE for help adapting their already existing entrepreneurship programme for young offenders, into a similar initiative aimed at at-risk girls and women. They believe that by helping these girls or their mothers create small enterprises, and as a result increasing their financial independence, it would help give them the power to resist and stay away from any form of sexual exploitation and trafficking.

So, a team of professionals from England, Canada and Switzerland came together to build on the existing programme so that the girls can create financial independence, and create a better future for themselves and their young children. They worked on a Student Workbook, as well as funding opportunities for the Girls Community Scholarship Programme and a mentorship development programme aimed at those girls.

Initial results from the TIE project were already proving successful. With a high number of girls and women showing real interest in the programme, coming up with ideas for enterprises, and word of mouth had increased the numbers of participants so much that another bus needed to be rented to accommodate the growing numbers.

You can check out the final presentation case study here.