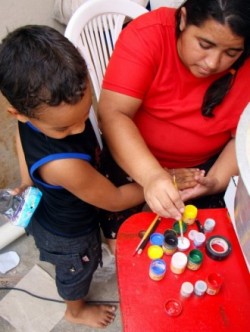 TIE’s partnership with Espaço da Criança (Kid’s Place) in 2011 was a very significant experience. The institution had never previously ventured in the communication field – an important area for attaining its social goals, and the exchange formed through TIE’s assistance successfully conduced the NGO towards its desired objectives – and beyond!

Although it has been in the same neighborhood for 20 years, most of the surrounding businesses and institutions were either unaware of Espaço da Criança or hostile to it, as it brought the people from the favela in the neighborhood. A communication campaign that promoted greater awareness and sympathy towards the NGO was needed to revert the scenario.

Joseph Pirrie, the account manager from Proximity London, the publicity professor Fernando Fontanella and his students from Agência Experimental (Aê) were able to develop a captivating and effective campaign (read more about the campaign here), which used external bus media in the city’s main avenue, an institutional movie, creation of social media pages and other features. As a result, a large number of businesses and institutions immediately became aware of Espaço da Criança and got involved by giving donations and executing events for the children (read more here).

CONTAX, a large telemarketing company in Recife, came to know about Espaço da Criança through the bus campaign, which was seen by a few employees of the company. Since then, they have visited the institution and became truly engaged with it. Although the company itself is not supporting Espaço da Criança, its employees have pretty much adopted the institution and have executed several actions so far which were of great help. A few months after the campaign launched they planned and carried out parties for the children on Dia das Crianças (children’s day), Christmas and Passover, giving at least one present to each one of the 100 children in each celebration. On one occasion, they were able to mobilize as many as 70 people (among fellow employees, friends and family) to help, either by participating or by sponsoring a donation. Additionally, they are also making collective birthday parties every three months.

Rafaela Gomes of CONTAX had this to say: “We had been looking for an institution that we could help. Then we saw the campaign and decided to know more about Espaço da Criança ”

Besides everything that they have already done and are currently doing, CONTAX and Espaço da Criança also have a few things planned for the future. CONTAX are currently trying to develop a project with the Organisation teaching art craft (bijouteria) to teenagers. And the employees of CONTAX are also organizing a project for where sponsors can “adopt” each one of the rooms in the Organisation’s new headquarters. The coordinator of Espaço da Criança says this about the experience with TIE so far: “This campaign brought us a very important partner, who has been making a real difference to the institution” (Edna Monteiro)

Espaço da Criança had an average of 3 to 4 phone calls per week for two months following the launch of the campaign, and received visits from people who donated food, money and even cradles which were very much appreciated by the mothers in the favela.

When asked about the TIE experience, Espaço da Criança’s president, Núbia Mesquita, had this to say “It was the only communication campaign we ever did in 20 years, and the results far surpassed our expectations”. According to her, TIE’s initiative is very beneficial, as it takes NGOs into an international dimension to which they wouldn’t easily have access otherwise, “and it is also gratifying to see all the creativity and generosity involved in the process”, she adds.