Be the voice of the Quilombos and develop a video documentary to help tell their story. 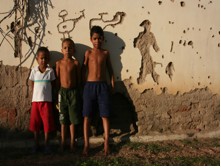 International Service (IS) is a UK registered charity that works to promote long-term development in poor communities in the Third World by working in partnership with local organisations, non-governmental or governmental organisations or with the two in collaboration. IS works to combat poverty and oppression by working to increase global understanding of development issues and improving local society in the world’s poorest countries.

Acting in response to local requests for skills that are not available in the region, IS provides Development Workers, who share their skills and experiences with the local people to strengthen their efforts to improve their situation, their functions and future.

TIE is working with the Recife office to help raise awareness in the UK of: the positive effects of development work realized in Brazil, the concept of Global Citizenship (defined as “having a sense of your role in the world and being willing to take action to bring about change towards the goal of the eradication of poverty”), and development issues.

Specifically, IS Brazil is working with AQCC, a community-based NGO located in the Quilombola territory of Conceição das Crioulas, state of Pernambuco, Northeast Brazil.

Today, in Brazil, the Quilombos are communities inhabited by the descendants of those slaves escaped during the 17th and 18th centuries from the colonial farms located in the Brazilian coasts. The Quilombo of Conceição das Crioulas, through its community association AQCC, is very active and well-known in Northeast Brazil for its fight for the right to access and possess the communal territory and land, the initiatives for the right of African-based educational models and the actions for community income generation.

Responding to AQCC’s needs, IS placed a Mozambican agronomist and development worker in the community, who supports the community in the production, diversification, internal consume and commercialization of organic produce without pesticides. The results have been astounding and the cultural aspect of this partnership fascinating. 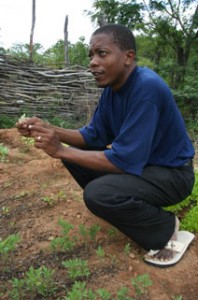 The Mozambican agronomist is the first person born in Africa to live in the Quilombo inhabited by descendants of rebel slaves, and this has created a strong link between the development worker and the community as example of interchange of cultures and south-to-south cooperation.

We want to share this story. Be the voice of the Quilombos and develop a video-documentary about the partnership between IS Brazil and AQCC.