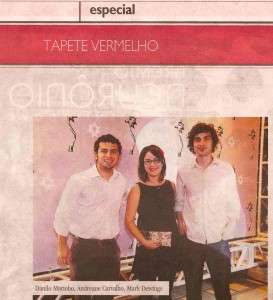 Well this is something I wasn’t expecting…

Having been invited by Makplan to the Recife advertising awards hosted by media conglomerate JCPM on Thursday 3rd December, I hadn’t realized that a few days later I’d appear in a special supplement of local newspaper Jornal do Commercio!

If you happen to have a copy, open the front cover and there I am with Danilo and Andreane from the agency. In the more likely case that you don’t, the pics are above.

My mum will be so proud.

I have just experienced a little bit of the ”showbiz” nature of advertising in Recife. And oddly enough it made me think a lot about the rate and nature of economic development and income inequality.

In New York I’m constantly being told by people who’ve been in advertising a decade or so longer than me that ‘it just isn’t like the old days’. I’m told of parties where champagne and money flowed. They always end with “it just isn’t the same anymore”.

But in Brazil it’s boom time. Advertising here probably has a similar feel to Madison Avenue in the 1980s. It’s new, people are excited to part of it, and everyone is breaking new ground because none of this has been done before. Ad people are lavishly enjoying spending the fruits of their labor.

This sits in stark contrast to the situation of many of the poor communities I’ve visited in the past couple of weeks. I don’t think this was TIE’s specific intention, but visiting with community leaders in the favelas one minute and hobnobbing with the advertising set the next has thrown the these two worlds into relief more sharply than I ever would have expected.

It highlights a conundrum of development; the growth of the wealthy middle class is good news for the national economy, but income inequality worsens as a result.