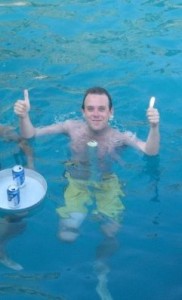 Joseph joined Proximity in November 2006, after moving to the UK from his hometown in Melbourne, Australia. He’s worked on a number of Proximity’s largest accounts from Volkswagen, to Walkers, to Save the Children. For two years he worked in the charity hub managing numerous fundraising campaigns in both acquisition and retention roles. A core part of Joseph’s role saw him lead delivery of the multi-award winning RNLI Youth Campaign. This social media project linked RNLI with influential YouTube vloggers to co-create a campaign challenging the negative image of ‘youth’ in the media today.

Joseph is a Senior Account Manager, currently heading up the small cars division of the Volkswagen account at Proximity. Over the past 12 months his responsibilities included planning, delivery and roll out of Volkswagen’s first integrated consumer contact strategy – targeting customers and prospects with personalised, timely conversion comms across digital and direct channels. He’s also been responsible for planning and delivery of numerous launch and tactical campaigns across the small cars portfolio.

Prior to moving to the UK, Joseph completed a Bachelor of Communications at RMIT University in Melbourne before taking up a graduate placement at boutique marketing communications agency, Haystac. During his time at Haystac he worked on a number of blue chip accounts including Toyota and Motorola.

Outside of work Joseph enjoys travelling wherever and whenever he can. In the past four years he has managed to visit 22 countries across Europe, Asia and the Americas. Friends would consider Joseph a bit of a social animal – he enjoys entertaining, cooking and nights out. He has a terrible singing voice and an alarming collection of drunken anecdotes, which he’ll readily share given a few pints.